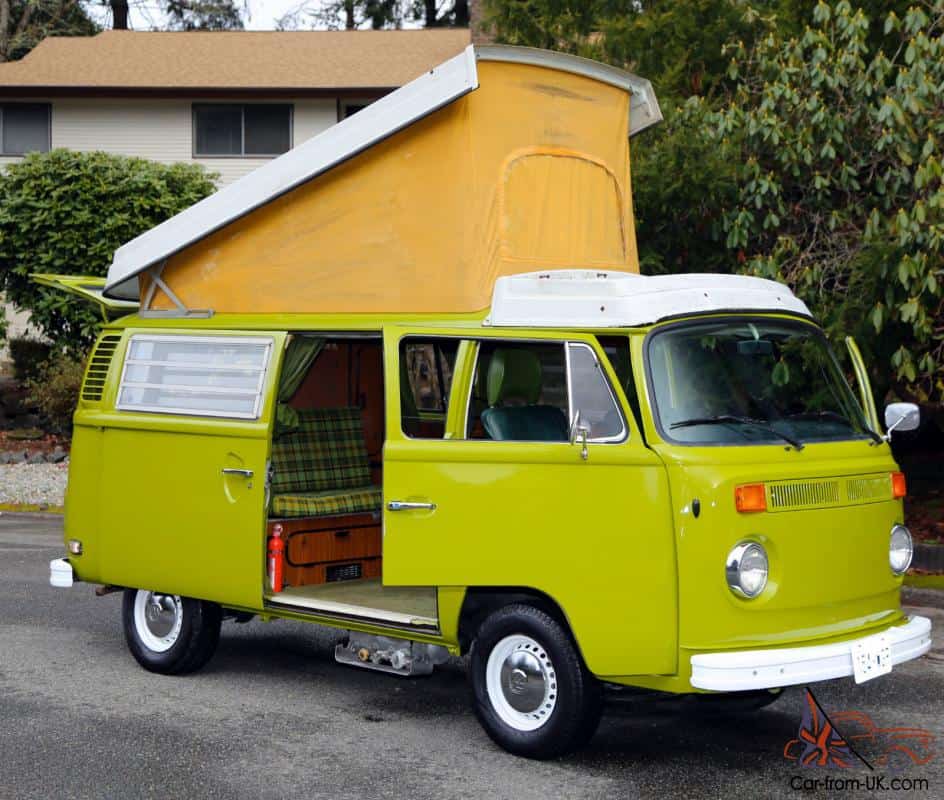 VW vans have gripped the American imagination in a way few products have. For vehicles that hit the scene in 1950’s Germany, they’ve created and maintained an avid American following for the past 70 years. But, why are old, European vans such a prized possession, and why are they so expensive?

The answer to that question is basic supply and demand: VW vanagons and campers had their hay day decades ago; Production lines stopped making models based on the earlier the vanagons and Kombi designs in 2003. So, whatever vans are on the road- or kept in garages- are the last of the line. Their rarity, along with their charming design, keeps the VW van price at a premium.

This story begins with Dutch businessman, Ben Pon. After visiting a Wolfsburg-based VW factory, he drafted the sketch that VW engineers would later use as inspiration to create a prototype for the first-ever VW camper van. In it’s earliest form, it was a simple design- a small box on a four-wheel chassis.

Over the next few years, the car manufacturer expanded on this simple concept and designed almost a hundred different automobiles for various uses, including pick=ups, fire engines, camper vans, and others. In the camper van line, the following developments were made:

1949: The Splitty Was Introduced

Officially known as Type 2, the split-window model was manufactured until 1967. It arrived in the US market in the mid-1950s, where it was an instant hit (nearly 200,000 units were sold by the early 60s). To date, it remains one of the most popular models in the US, with a VW camper can in good shape costing as much as $50,000.

In 1967, the Type 2 was replaced by the Bay. In many ways, the Bay was an evolution of the split window model. Some of the most notable improvements in the new model included:

1975: The Bay Camper Bus Was Introduced

The Bay Camper Bus came with many of the Bay’s features, but the window design was different. IT soon became popular among consumers looking to use it as a mobile home or a camper can due to its spacious design.

In 1979, the German car manufacturer discontinued the Bay Camper Bus, and in its place came the T25 (also knows as the T3). It was a complete overhaul of the Old Bay window model, with few features carried over. Most notably, it had a larger tailgate and windows, as well as a redesigned front style. Also included was a new suspension, meaning the torsion bar system was no more.

VW focused most of its marketing efforst on the Westfalia Camper version of the T25, touting features such as a stove, sink, and a pop-up roof. The years between 1979 and 1990 were dramatic for the T3 van line. In that period, the T3 product line made several upgrades:

The 90s came with a new generation of the Transporter, the T4. Considered a revolutionary model by VW, it had a water0cooled engine and brand new design that made it ideal for converting to a small-to-medium sized campervan.

In 2003, the T3 went into production, having been officially unveiled the year before. A new California Motorhome model also rolled off the assembly line, this time with a built-in house. Fully equipped with seats, a sink, a fold-up table, and beds, it was arguably the best modern-day campervan at the time. Its more pocket-friendly version, the California Beach, only had a bed.

Fast forward to 2014, and Volkswagen had retired its camper van, primarily because the carmaker struggled to keep up with the modern era’s endless list of safety regulations. Although production stopped, the VW camper van’s popularity carries on today, along with an expensive price tag.

Why Camper Vans Are So Expensive

Today, old, rusty campervans are still sold for around $10,000, while vintage, fully-restored collectors’ vans have sold for $175,000!

Why are VW camper vans so expensive? Several reasons:

They Have a Cult Following

VW camper cans have a cult following. In other words: Most of what you pay for in a VW van has more to do with nostalgic value rather than actual value. It’s hard to put a finger on precisely why people have so much love for a van that not only comes at a premium but also with a handful of reliability issues.

Everyone in the van life community knows that older VW Vanagons are notorious for frequent breakdowns. They frequently need repairs, which can get very costly, very quickly, for the non-DIYer. Minor repairs like a door mirror replacement can cost between $500-$1000 for a 1983 VW Vanagon, with more technical repairs like a brake master cylinder and power steering pressure hose replacement costing in excess of $1000. And be warned: VWs are notorious for engines that set on fire. (Seriously.)

The good news is that older VW vans have a simplistic design that makes DIY repairs easy. The construction is simple, and there are no digital parts to complete repairs. Many VW vanagon owners always keep a copy of “How to Keep Your Volkswagon Alive” on board. This is an essential- and charming- old school manual with extraordinarily detailed hand-drawings by a VW lover.

For less than $30, you get to learn how to perform otherwise costly repairs yourself, from impressive, hand-drawn illustrations. Provided you’re willing to learn a little about mechanics and get your hands dirty, this can be quite a money saver.

Given VW’s cult following and the fact that VW campers’ production stopped in 2014, there’s an imbalance in the supply and demand of VW camper vans. A lower supply and a high demand translate to a high price in any market, and that’s the case for VW camper vans.

In the US, there are generally no dealers from which to purchase new VW camper vans. Although a new electric California model was released in Europe, it’s not available in the US, and it’s quite expensive. And while the modern design may be similar to the old, charming Vanagons, it’s certainly not the same.

VW vans are still some of the most popular camper vans ever to be sold. Their continued popularity and cult following has kept the price point high, even for rundown, old vehicles.

Through design and nostalgia, VW camper vans have retained immense value- both in the minds and the pocketbooks- of consumers. Their popularity shows no signs of slowing.

For those willing to dole out a pretty penny for a much older camper van, don’t mind frequent trouble-shooting, and are ready to roll up some sleeves and get a little dirty, a VW van is still the perfect little camper for living and travel.

If you’re like most people, the idea of a wheelchair accessible RV is probably new to you. But the truth is, for many people who use wheelchairs, an RV can be a great way to get around. Whether...

Travel trailers make for a convenient and comfortable way to hit the open road and explore the country. If you're in the market for one, chances are that you've come across several blogs that claim...

Welcome to Debt Free RV! I’m Sarah, a full-time RVer. With my husband, we’ve been able to pay off ALL of our debt by living in our 19′ Cobra Passport RV! For the past 7 years we’ve lived in our little tiny house on wheels, focusing on Debt Free living, financial freedom and RV adventures. We love helping others learn about the RV/van lifestyle and encourage those who’ve always wanted to, to join the caravan. Thanks for visiting, we’re so happy you’re here!